This Robot Serves Up 360 Hamburgers Per Hour and may steal your job! 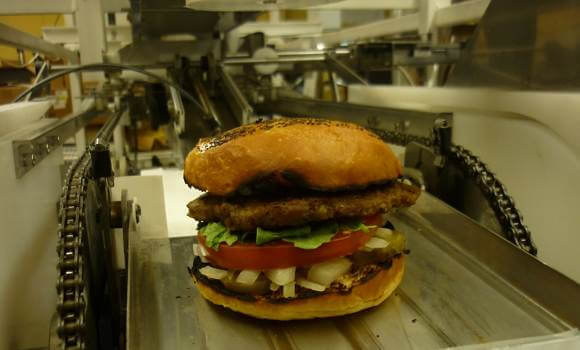 No longer will they say, “He’s going to end up flipping burgers.” Because now, robots are taking even these ignobly esteemed jobs. Alpha machine from Momentum Machines cooks up a tasty burger with all the fixins. And it does it with such quality and efficiency it’ll produce “gourmet quality burgers at fast food prices.”

With a conveyor belt-type system the burgers are freshly ground, shaped and grilled to the customer’s liking. And only when the burger’s finished cooking does Alpha slice the tomatoes and pickles and place them on the burger as fresh as can be. Finally, the machine wraps the burger up for serving.

And while you fret over how many people you invited to the barbecue, Alpha churns out a painless 360 hamburgers per hour.

San Francisco-based Momentum Machines claim that using Alpha will save a restaurant enough money that it pays for itself in a year, and it enables the restaurant to spend about twice as much on ingredients as they normally would – so they can buy the gourmet stuff. Saving money with Alpha is pretty easy to imagine. You don’t even need cashiers or servers. Customers could just punch in their order, pay, and wait at a dispensing window. 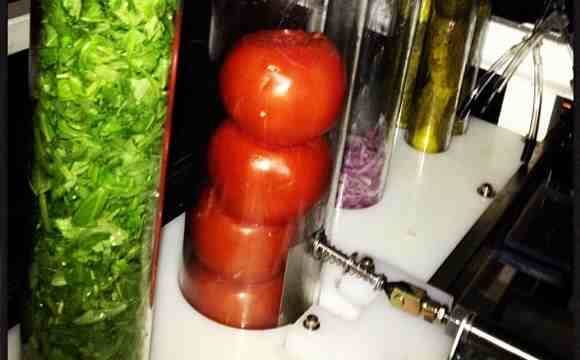 For their next model Momentum Machines plans on adding a custom meat grinding feature so it can mix different meats – 1/3 pork, 2/3 bison sounds like a tasty combo – in the same burger. They’ll also give it gourmet cooking abilities that seasoned chefs use such as charring the burger while retaining its juiciness.

The company plans on launching the first ever restaurant chain with a cook staff made entirely of robots. But not only might we soon find Alpha’s creations at local burger joints, but the company is also targeting convenience stores, food trucks, and somehow even vending machines.

We will need some New Strategies to Combat Obesity

via Robots Will Steal Your Job • Robot Serves Up 360 Hamburgers Per Hour.

Follow me
Mario Cipriano
President, CTO at Team Internet Solutions
A veteran of the IT industry with over 25 years experience delivering, managing and implementing solutions for companies small and large. Mario is also actively involved in his local community of North Ridgeville.

Follow me
Latest posts by Mario Cipriano (see all)
Machines

A veteran of the IT industry with over 25 years experience delivering, managing and implementing solutions for companies small and large. Mario is also actively involved in his local community of North Ridgeville.
View all posts by Mario Cipriano →

Posting to social media can be fun, informative and can add value. It's important to make sure you follow these basic guidelines. Think before you post. Think Before You Post...

The Internet Is Gradually Replacing Traditional Media According to data published by ZenithOptimedia this week, people around the world now spend more than eight hours a day consuming media, with...